In the first year of operation, the teams have carried out 6,557 awareness actions in 24 neighborhoods and 17 pedanias to avoid conducts that litter the public road. The most frequent incidences are motivated by leaving the bag outside the container, not classifying the waste and by dragging bags with liquids. Roque Ortiz is satisfied with the balance because "we have detected that many citizens and managers of establishments are changing their habits to maintain a cleaner city, thus fulfilling the objective for which we launched these brigades." 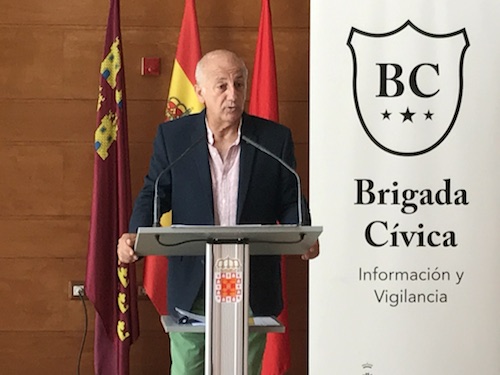 The Civic Brigade of Information and Surveillance, launched thanks to the collaboration of the Department of Development and the concessionaire Ferrovial Servicios, has carried out 6,557 awareness actions in 24 neighborhoods and 17 districts since it was created on July 1 Of last year.

On the occasion of this first year of operation, Councilor Roque Ortiz has made a balance of the work carried out by the teams that tour the municipality informing traders, hoteliers and neighbors of the mandatory compliance with the rules of the Municipal Road Cleaning Ordinance, through A work close and informative.

Awareness-raising actions have been grouped by distinguishing between citizens, grocery stores, pharmacies and clinics, offices, bars and restaurants, shoe stores and clothing and other businesses.

These entities have been explained the regulations on cleaning and collection of waste provided for in the municipal ordinance, while they have been informed about the services that the City Council provides in this area.

23% of visits have been made to citizens, 16% restaurants and bars, 9% to grocery stores, 10% to shoe shops and clothing stores, 6% to pharmacies and clinics, 7% to offices , among others.

Ortiz, who has been accompanied in the presentation by the Director of Cespa Urban Services of Murcia, Antonio Igualada, said that ‘after a year of operation, and as a result of awareness raising, we have detected that many citizens and managers of establishments Are changing their habits to maintain a cleaner city, thus fulfilling the goal for which we launched these brigades.

The teams offer information, surveillance and control to ‘recognize civic behavior, acting at all times in favor of Murcia and against offenders, because these are the ones that prevent the rest can enjoy a perfect image of our environment’ Ortiz explained.

In total, this year 1,063 incidents were recorded for not complying with the Municipal Ordinance. Of these, 28% were from restaurants, 16% from shoe shops and clothing, 8% from citizens, 7% from groceries, 5% from pharmacies and clinics, and 6% from offices. These cases occur when the requirements are not met, a follow-up is made and an incident is generated.

As for the typology, the largest group – 81% – corresponds to the throwing of rubbish in the public highway, that is, leaving the bag outside the container when it has sufficient capacity; Due to lack of cleaning in the public road (private use), not to classify the waste and by dragging bags with liquids, account for 16% of the incidents generated. For not collecting the excrement of your pet, not complying with the schedule of garbage deposit and abandonment of furniture and fixtures in the public highway have generated 31 incidents.

In the event that the causes that motivate the incidents are repeated and persisted on three occasions, a voluntary complaint is generated for breach of the ordinance, leaving the complaints recorded in the bulletins and delivered a copy to the offender.

The total number of voluntary complaints has been 173, of which 63 are currently in process, 26 in executive and 93 have been paid by the violators. The most common cause has been for leaving waste out of the container.

On the other hand, the first year of the establishment of the brigades has shown an increase in door-to-door collection of commercial paper, the success of the service of separate collection of glass in restaurants or the increase of establishments that have Requested the keys of the nearest underground containers to prevent them from depositing their waste outside the containers.

From now on, the aim of the teams will be to spread the ordinance among citizens at street level and, from the next course, will visit the schools to solve doubts, inform and provide useful tools to get a greater involvement in the care And maintenance of cleaning in the city.

Throughout this year, the brigades have collected suggestions from citizens, know firsthand the mistakes and bad habits most common, and this information will be useful in their talks, in which they can tell in first person anecdotes and curiosities experienced, Contributing to make the activity more dynamic and playful and, above all, practical and informative.

These talks will not only go to schools, but will serve as a basis for other groups such as youth centers, institutes, centers for adults, women’s centers, retailers and hospitality.

Source: Media Center of the City of Murcia